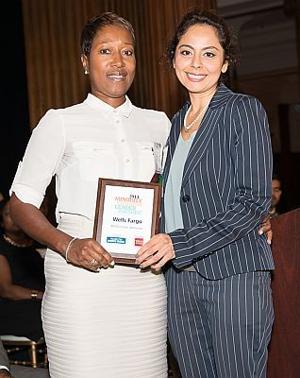 Patricia Claybrook is making her mark on the commercial cleaning industry.

Claybrook was recently named a 2014 Minority Business Leader by the Philadelphia Business Journal. She is one of 25 honorees recognized by the publication as the most successful minority business leaders in the Philadelphia region.

“It means a lot because it’s recognizing my accomplishments as an African-American woman. An organization like the Philadelphia Business Journal is a very esteemed organization in the business community. It is a wonderful recognition for hard work,” Claybrook said.

For Claybrook, the seeds of entrepreneurship were planted early on. The Trinidad native moved to the United States at the age of six and was impacted by her father’s work ethic.

“I’ve seen my dad who has a tremendous work ethic work from nothing to become a VP of a major corporation. I saw him working hard for someone else and he just planted the seed for me that one day, I want to own my own business,” said Claybrook.

During her years as a pharmaceutical sales representative, Claybrook encountered physicians who were dissatisfied with the cleanliness of their offices and lack of professionalism they received from the cleaning agencies they dealt with. This spurred her to start a commercial cleaning business.

Claybrook launched Jidan Cleaning in 2005 after conducting research and working with the New Jersey Small Business Development Center at Rutgers-Camden. At the time, she juggled running her business with working as a director of business development for a hospice company.

“I planned it that way because I wanted to make sure that I had everything in place and a good infrastructure before I made the move to run it full-time,” Claybrook recalled.

Last September, Claybrook was one of 23 entrepreneurs who graduated from the inaugural Goldman Sachs 10,000 Small Businesses-Philadelphia program. Goldman Sachs 10,000 Small Businesses is a $500 million program that seeks to unlock the growth and job creation potential of 10,000 small businesses across the United States through access to business education, financial capital and business support services.

“I tell everybody that for me it was a transformational experience. It’s the gift that keeps on giving. It just afforded me a lot of opportunities,” Claybrook said of participating in the 14-week program.

While she found the program’s content to be relative to her business, Claybrook also appreciated being able to form a special bond with 22 other program graduates. The initiative enabled Claybrook to develop key relationships with agencies and major companies.

Entrepreneurs who participate in the Goldman Sachs 10,000 Small Business program graduate with a five-year growth plan.

As part of her growth plan, Claybrook opened a second office in the city’s Northern Liberties to expand the company’s presence in Philadelphia. She’s set a goal to reach $5 million in revenue by 2017 and is actively seeking large contracts with major office buildings, hospital systems and charter schools. Jidan Cleaning is in the process of obtaining an 8(a) certification through the U.S. Small Business Administration so it can compete for government contracts.

Jidan Cleaning currently has 52 employees. The company is slated to receive a contract which will grow its employee base to about 100.

Claybrook first started out with the goal of taking care of her family. Within the last nine months, Claybrook said her vision has shifted to focusing on providing employment opportunities for people.

“I want to help them improve their situation by giving them gainful employment. I’ve seen how that has changed the lives of folks that work for me, especially those that might have been incarcerated before and no one would give them a chance,” said Claybrook.

She takes pride in offering employment opportunities to ex-offenders and giving them a second chance.

“If I feel that you are sincere and you realize that you made a mistake, I’m willing to give you a chance. That’s all some people want — someone to believe in them,” she pointed out.

Claybrook is a member of the Pennsylvania-New Jersey-Delaware Minority Supplier Development Council (MSDC) and the Greater Philadelphia Chamber of Commerce and has worked with the Enterprise Center.

“I’m an outsider in the Philadelphia market,” Claybrook acknowledged. “I wasn’t born in Philly. I live in South Jersey. I was a new face to a lot of people, but you have put yourself in a position where they keep seeing your face and that you’ve built a reputation of integrity and that you deliver on what you say you are going to do.”

The recognition from the Philadelphia Business Journal is one of three awards that Jidan Cleaning received in the last nine months. Last December, the company was named Supplier of the Year by the MSDC. The MSDC is a regional affiliate of the National Minority Supplier Development Council, which focuses on advancing business opportunities for certified Black, Hispanic, Asian and Native American business enterprises.

The MSDC’s Supplier of the Year award is presented to companies that distinguish themselves by demonstrating growth in both sales and employment while overcoming adversity; and which provide superior goods or services, enhance minority business-to-minority business purchase and contribute to society and the local economy.

Claybrook also captured a 2014 Governor’s ImPAct Award in May. Jidan Cleaning was a finalist in the community impact category. This award is given to a company that exemplifies the tenet of “doing well by doing good.