“I am so excited about this room.” That’s how U.S. Sen. Cory Booker began his roundtable event for women small business owners Friday morning at Rutgers University’s Bloustein School of Planning and Public Policy in New Brunswick.

“You all in this room right now have such a profound potential to make even a greater impact,” Booker told those in attendance.

Following the senator’s remarks, attendees heard from a panel of female entrepreneurs and participated in breakout sessions focused on accessing capital and government contracting opportunities.

Booker cited recent figures from American Express showing that there are currently some 230,800 women-owned businesses in New Jersey that are on track to do roughly $45 billion in sales this year.

“If better is possible, good is not enough,” Booker said. “So we need to make sure that we go further.”

New Brunswick mayor Jim Cahill was also on hand, noting that all too often he sees that women-owned small businesses tend to be smaller and less profitable than small businesses owned by men.

“That’s something we need to change,” Cahill said.

Booker said he’s been “encouraged” thus far by the public response to the roundtables and noted he plans to continue hosting them throughout the state with a particular focus on groups that he feels don’t always receive the support they need.

Upcoming roundtables may concentrate on specific industry sectors such as manufacturing and technology, the latter of which Booker says has a lot of potential in New Jersey.

“I think it’s a real growth sector and there’s a lot of entrepreneurialism happening there,” Booker said of the tech sector. 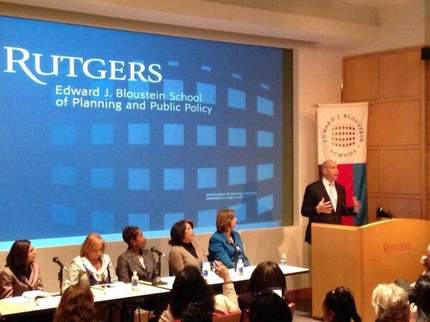